Directory of Professionals, Businesses and Associations

Use your Tablet or Smart Phone to Scan QR Code. 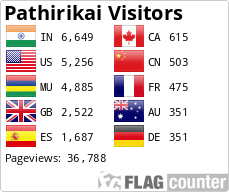 The tamil translation of the book ANJALAY, written by Mr. Pyneesamy Padayachy, O.S.K., has been launched in Tamil Nadu at the Chennai Book Fair on Pongal Day 14  January.

The book has been translated by Mrs Vimala Nadaraja Pillay of Mysore and printed by Kaanthalagam publisher of Chennai.

The author attended the function, and addressed the audience which was composed of  Dr. A. Ramalingam, former Head of Tamil Department at the Madras University and  Talabady Stalin, President of Dravida Munnettra Kazhagam (DMK) and leader of Opposition at the legislative assembly of  Tamil Nadu.

Pyneesamy Padayachy (born 1931) retired from the Civil Service as Permanent Secretary. He is a poet, playwright, short story writer, biographer and the author of historical , cultural and religious articles. He wrote his prize-winning play "Capture of Mauritius" at the age of 21. His book Anjalay has been accepted by famous librairies in England. His patriotic poem "Cheers for Quadricolour" has been translated into several languages and set to music. He has been awarded the distinction of OSK by the Government of Mauritius for distinguished service to the community.

Below, two of the books he has written, and which are available in librairies.

Thirukkural Isai - Ullamthirum Valluvam is saint Thiruvalluvar's Thirukkural Comprising of 1330 Kurals in light musical form. The album is conceptualised and composed by Indian music composer Bharadwaj. This first of its kind global project, has the 1330 Kurals sung by professional singers from all over the world and its meaning rendered by Tamils from all walks of life and from around the world.

The philosophy of Thirukkural in musical form will provide guidance and breakthroughs for everyone in every sphere of human endeavor.

Thank you for contacting us. We will get back to you as soon as possible
Oops. An error occurred.
Click here to try again.

The Online Newspaper for the Tamil Community of Mauritius